The Super Bowl is Sunday, bringing to a close an exciting 2019-2020 NFL season especially for those of us at DisposeRx.

The Baltimore Ravens and Leidos—a large employer and government contractor based in Reston, Va., invited us to participate in their Tackling Opioid Addiction Campaign for the season. 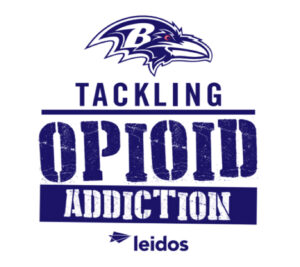 Prior to a number of games, we set up in Ravens Walk and handed out co-branded six-pack boxes of our packets and provided demonstrations to the enthusiastic Ravens’ fans, as well as their competitor’s fans. We educated them about the importance of maintaining their medicine cabinets through prompt and proper disposal.

“I always appreciate the opportunity to talk with consumers about our product—especially in the Baltimore area where residents are keenly aware of the opioid problem devastating their community,” said Jeffrey Bekos, DisposeRx Senior Vice President of Business Development. “The fans asked great questions and were eager to share their stories about how our product will make a real difference for them and their families.”

DisposeRx was included in the campaign as a result of a conversation our late chief executive officer and chairman, John W. Holaday, PhD, had with Leidos CEO Roger Krone at the signing of HR 6 at the White House in October 2018. Krone discussed with John the critical impact the opioid epidemic is having on his employees and their families. Krone also encouraged John to sign his CEO Pledge to End Opioid Addiction that he created to illustrate the need for employer focus on the issue.

In late April, the campaign will continue during NFL Draft Week with a week-long blitz around the City of Baltimore where we will make rounds to law enforcement agencies, non-profits and healthcare organizations to distribute more boxes and share information. The efforts will coincide with DEA Take Back Day, which is Saturday, April 25.

Clean out your medicine
cabinet today!

How to Use DisposeRx

Apply for a donation
of DisposeRx packets
here