The Davis Direction Foundation, a Marietta, GA-based recovery community organization that fights addiction and fuels sobriety, was a group supported by our Founder and CEO John Holaday prior to his untimely passing in October 2019.

We recently had the opportunity to speak with Missy Owen, founder of the Foundation and a dear friend of Dr. Holaday.

When did you start Davis Direction Foundation?

The Davis Direction Foundation was established three weeks after the overdose death of my son, Davis. He died on March 4, 2014, and we started the Foundation on March 21, 2014, as a ministry to help those who wanted to find recovery from substance use disorder and maintain their sobriety.

When/how did you meet John Holaday and DisposeRx?

I first met John in 2017 at the Rx Drug and Heroin Summit in Atlanta. I jokingly asked him if I could take a picture with him to tell people I had met George Bush! He began to tell me about DisposeRx, and I was fascinated! I told him about Davis, and we had an instant bond. I knew this man had come up with a product that could change the trajectory of the heroin epidemic that we were in, and I had so much respect for him. He had so much compassion for me because of my loss and how I had turned it into something that would help others. He used Davis’s story on more than one occasion to represent how DisposeRx could have changed the pathway that Davis had gone down if we had not had opioids in the family medicine cabinet. John and I spoke often, and we always helped each other when we could. He spoke at our first Building Communities of Recovery National Conference, and everyone fell in love with him. His enthusiasm and passion for what he did was so contagious!

What made the bond between John and you so strong?

Mutual admiration for each other. John and I wanted to help each other, and there was the passion for what we believed in that we had in common. I knew that I could call John for anything, and I hope he felt the same way. Also, we connected each other to people who we knew had our best interests at heart and could help us spread our missions. John and I were also big family people! We both loved our families, and we also had that in common.

What do or will you miss most about him during the Davis Direction events this year?

What I will miss most about John is his love and support! He had a way of making others feel special and cared for. I will miss his stories and watching him work a room like no other human I have ever known!

What impact has John had on your Foundation? 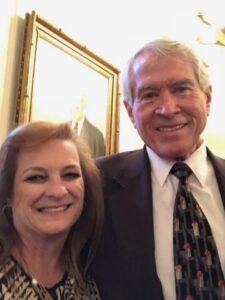 John’s impact on the Davis Direction Foundation runs wide and deep. He helped formulate a product that could single handedly wipe out left-over medication in the family medicine cabinet where 85% of all heroin addictions begin. He also made it possible that we could carry his product far and wide when we travel and speak around the country. I never leave home without my DisposeRx because you never know when you will have an opportunity to share this amazing product with someone who may need it. I have spoken with ALL third-year medical students at George Washington University in Washington, DC and told them to NEVER write an opioid prescription without sharing the great news about DisposeRx. John’s wife, Dori, also asked that all donations made in memory of John be given to our Foundation. We have established the John W. Holaday Award for Excellence in the Field of Recovery to be given at our National Conference. This will be the first year the award will be presented and Dori has been invited to announce this award.

What is your vision for the Foundation over the next few years?

My vision for the Davis Direction Foundation over the next few years is to continue to support the services to help people get to and stay in recovery and to expand the services and support that we currently offer. We currently have over 3,000 visits a month to THE ZONE, and I would also like to see that number increase and overdose deaths in our community decrease. I would love to see ZONE’s pop up all over the country. Just like people know those Golden Arches mean cheeseburger and fries, they would know that the Green Double D winged Dove of the Davis Direction Foundation means you can drop in for recovery support!

What can you tell us about the Beyond the End Zone event?

This event will be a tailgate party like no other and will be held on March 26 from 5:00-9:00 p.m. at the Piedmont Church in Marietta. Three of the 22 starting tight ends in the NFL will be there to encourage, inspire and offer advice on living a purpose-filled life. A former Heisman Trophy Award winner will bring the trophy for photo ops and autographs, along with marching bands, cheerleaders youth teams and the ultimate tailgaters BBQ. Parents, coaches, educators and friends will not want to miss this opportunity to educate themselves and their children on the use of prescription drugs and mental health.

Will you be adding other events to your calendar–similar to the Beyond the End Zone event?

We are always looking for new and exciting ways to share recovery with our community are working on a couple of events that will involve recognition of recovery at major events. It’s time to bring addiction out of the closet and into the public eye! There is nothing to be ashamed of and nothing that can’t be overcome.

Is there anything else you would like to share about the Davis Direction Foundation and DisposeRx partnership?

Even though John is gone from this earth and watching over us from high above, the wonderful people of his organization and I are still working together to accomplish great things in a world overcome with drug addiction. We will continue to be passionate about what we do and the people we support. I am forever honored to align our Foundation with the wonderful people of DisposeRx as well as their amazing mission. We will forever honor John as long as we have life and breath. There is no one on this earth I am prouder to call a partner.