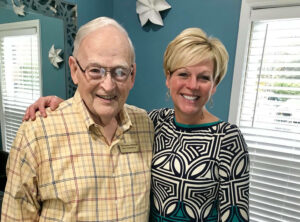 Late in 2016, my stepfather of 40+ years began showing signs of confusion and decline following the deaths of several loved ones. Phone calls and visits were difficult due to the cognitive struggles, and then there were more serious issues such as him forgetting food cooking on the stovetop.

His medical issues continued and warranted a trip to the emergency department in January 2017 to rule out a possible stroke or neurological issues. I will never forget the doctor telling me that my dad, who was 85 at the time, had not suffered a stroke but instead was on a powerful and potentially deadly “cocktail” of medications for depression, anxiety, insomnia and pain and that he needed to be hospitalized to purge his body of the medications safely and while under observation.

Once he was discharged, we were able to convince him—with great persuasion and indeed pleading—to move to Raleigh to an independent living facility about two miles from my home.

It provided great comfort knowing that I would be with him consistently to help care for him, but as wonderful as the time was together before his passing, there were challenges as we shifted roles in our relationship.

My dad was a career pharmacist, so he did not relish the idea of me checking behind him on his medications or asking questions. He was a strong and virile man, so taking his car keys when it became obvious several months later that he was suffering from Alzheimer’s was excruciating. And he was a private and proud man, who fought through a 20-year battle with prostate cancer until it robbed him of his strength and life in January 2019.

I learned so much from him in his time of living and his time of dying. My hope is that each of you is as fortunate as I was to serve in the caregiver role for an aging parent. If you are so lucky, I share with you these suggestions:

I had to remind my dad many times over those two years that my motivations and interests were simply to keep him safe and living independently as long as we possibly could. And I feel so fortunate that he was able to do just that until the very end.