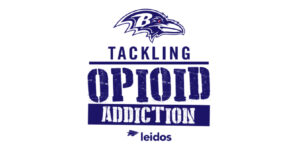 While it was not the dramatic and exciting conclusion we anticipated, the Tackling Opioid Addiction Campaign is over for the 2019-2020 season.

The Baltimore Ravens and Leidos—a large employer and government contractor based in Reston, Va., invited DisposeRx to participate in their opioid prevention campaign, which included handing out co-branded six-pack boxes of our packets and providing demonstrations to the enthusiastic Ravens’ fans at several games during the 2019-2020 NFL season.

The plan was to distribute the remaining 70,000 boxes during NFL Draft Week in April with a blitz around the City of Baltimore. However, COVID-19 forced a change in plans.

Nevertheless, Leidos moved forward last week with distribution of the boxes to a number of non-profits in and around Baltimore, including: 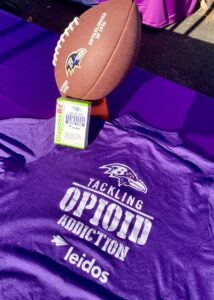 “While it would be easy to be disappointed with the anticlimactic ending of the campaign, we are extremely proud to have distributed tens of thousands of DisposeRx packets in Baltimore and surrounding communities through our partnership with the Ravens and Leidos,” said DisposeRx President William Simpson. “Helping educate citizens about the importance of prompt and proper drug disposal is part of our mission, and we were grateful for this wonderful opportunity.”

DisposeRx was included in the campaign as a result of a conversation our late chief executive officer and chairman, John W. Holaday, PhD, had with Leidos CEO Roger Krone at the signing of HR 6 at the White House in October 2018. Krone discussed with John the critical impact the opioid epidemic is having on his employees and their families. Krone also encouraged John so sign his CEO Pledge to End Opioid Addiction that he created to illustrate the need for employer focus on the issue.