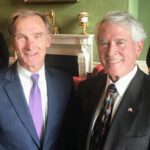 I first called John Hindman after I read a heart-wrenching article about him describing the tragic loss of his son, Sean, to an opioid overdose.  Accompanying the article was a photograph of John sitting in the bleachers holding his son’s well-worn soccer ball. As a father of two boys, I can’t imagine having to deal […]