West Virginia Drug Intervention Institute (WV DII) hosted a live panel discussion on Friday, May 21, 2021, to bring attention to the importance of medication safety and disposal.

The following are bios of the panelists and links to three video clips from the panel discussion. The entire recording can be viewed here. 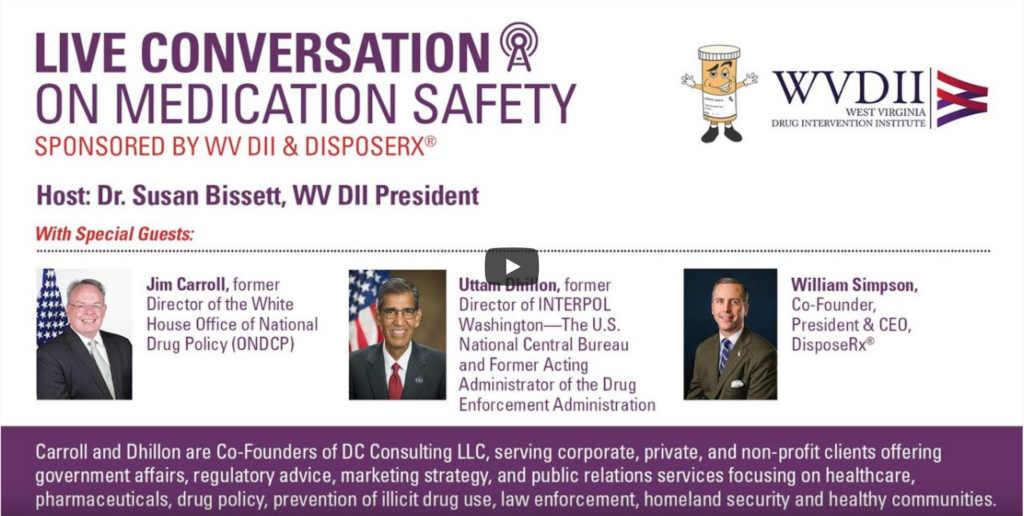 Uttam Dhillon is a principal and co-founder of DC —a firm dedicated to providing strategic guidance to clients in the areas of government affairs, regulatory advice, marketing and public relations services.

Until January 2021, Dhillon served as the fifteenth director of INTERPOL Washington. He previously served as the acting administrator of the Drug Enforcement Administration (DEA) where he led a workforce of over 15,000 and oversaw a budget of $3.2 billion. He was responsible for DEA’s enforcement, intelligence, administrative, and regulatory activities worldwide and led DEA’s National Prescription Drug Takeback Day in April and October each year.

Jim Carroll is a co-founder of DC Consulting—a firm dedicated to providing strategic guidance to clients in the areas of government affairs, regulatory advice, marketing and public relations services. Carroll is the former director of the White House Office of National Drug Policy (ONDCP), where he served as the principal advisor to the President of the United States on drug policy and managed a passionate staff of approximately 100 professionals. He oversaw a budget of more than $35 billion and successfully coordinated the activities and related funding of sixteen Federal government agencies and departments to reduce the supply of and demand for illicit substances. As the “Drug Czar,” Carroll garnered bipartisan support for his initiatives, enthusiasm and leadership skills.

William Simpson co-founded DisposeRx, Inc., in 2015 and has served as president since 2015 and chief executive officer since 2020. Simpson is an innovator and serial entrepreneur who is driven by his passion for simple and elegant products designed to improve lives. He is a native of Chicago and moved to North Carolina 30 years ago to assume leadership of his family’s horse farm operations—a role he now shares with his wife, Hillary.