I grew up in an independent pharmacy in eastern North Carolina.

For the first 10 years, I was a sickly child who frequented Paderick’s Pharmacy following visits to my pediatrician or the emergency room.

And then in 1975, my mom married the pharmacist.

Located in a strip shopping center sandwiched in between a grocery store and dollar store, our pharmacy had a rotating hot peanut machine at the front of “the store,” an incredible candy section—every kid’s dream, a gift line, durable medical equipment and two half-moon shaped soda fountain counters that were filled with many of the same customer faces day after day. They became our extended family.

I cherished my time there–wrapping Russell Stover candy and gifts for customers during the holidays, washing the nicotine off of the shelves with 409 spray, working the cash registers, folding statements for those to whom we extended credit and visiting with those gathered at “the lunch counter.” 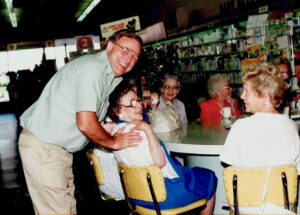 drink machines and watched him with our customers. He was amazing and so beloved.

He thought the world of his customers and for 36 years took care of their many needs. Hal would come from behind the prescription counter to listen and help guide them on their medication needs and questions. And despite working six days a week, Hal would never hesitate to run back to the pharmacy late at night or on Sundays if someone was discharged from the hospital or simply forgot to get his or her prescription refilled

He stood on his feet and worked from 9 a.m. to 6 p.m. Mondays through Fridays and from 9 a.m. until 2 p.m. on Saturdays, but then there were an additional two hours after the close of each workday in which he would complete the bank deposit, handle payroll, pay bills and manage the other operations of an independent pharmacy.

Time off was minimal and precious, as securing a relief pharmacist was difficult at best. But he loved it and served as a wonderful role model to those of us lucky enough to work along side him.

The truth is that Kinston, N.C., was home to many incredible pharmacists, who were just as loyal to their patrons and just as beloved. Many of them have passed on, including Hal, but my hometown friends and I will never forget them and enjoy sharing fond stories about them on Facebook periodically.

During this American Pharmacists Month, I would like to pay tribute to all of the small-town pharmacists and those who work in the bustle of large urban areas and everywhere in between—those who impacted our lives previously and also today. You play so many roles in our communities—caring for and improving the lives of individuals and families. You step up and shoulder additional responsibilities—again and again. You give so much of yourselves and ask for so little in return.

Thank you for always rising up and being there when we need you.

This article was originally shared on LinkedIn, October 26, 2021.